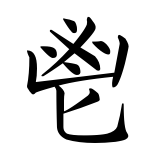 鬯 exists as an independent character, but you won’t find any modern Japanese words that are written with it. It seems to stand for ‘sacrificial wine’. This is Wieger’s (26 E) account of how 鬯 should be analysed:

Comparing Wieger’s notes about 鬯 and 食 (which have a similar etymology as a picture of a container of rice) with Henshall on 食, and also looking at the earlier forms of 鬯 it seems to me that the point in Wieger about 匕 being a spoon is likely to be a later reinterpretation. Originally the whole thing seems to have been picture of a rice container, probably with a firm bottom or foot. The element 匕 seems to have crept in as a result of new ways of writing characters (often involving abbreviations).