What is 亼 as an element?

Please take a look at these early shapes of the compound characters 今 and 令 and 念:

The graph 今 consists of

and an additional horizontal line, creating

. In oracle bone inscriptions (OBI) most instances of

show a symmetrically placed horizontal line, a few show a short line to the right or to the left. Ochiai (and other scholars) think

represents a roof or a lid for a container (certainly a cover of some sort). The additional line in

symbolizes according to Ochiai “something that covers or conceals something,” which would fit the associated meaning that 今 often has when used as a phonetic.¹

However, Qiú thinks it probable that 今 is not a cover of some sort with an extra line, but an inverted version of speak 曰. He argues that “for convenience’s sake” the originally rounded form of 曰 was written in an angular form.² 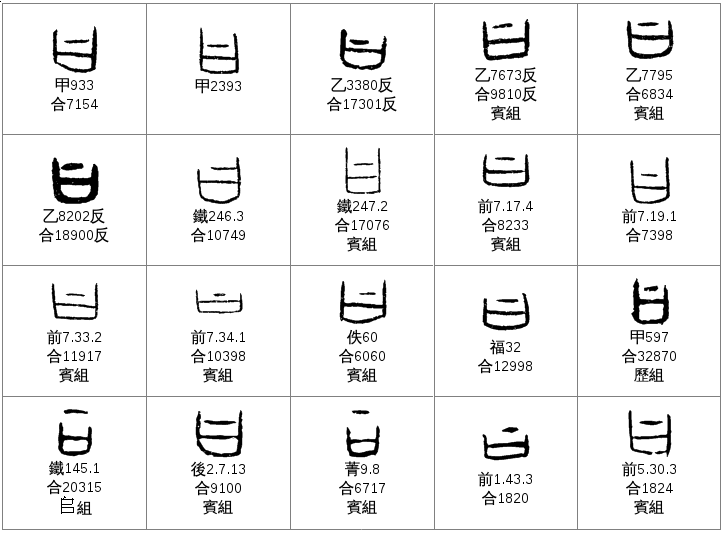 Note that OBI of 曰 usually have a symmetrically placed horizontal line as well.

In a similar way, Chi Hsu-Sheng argues that

(which is simply 曰 without the extra line). This leads to two different interpretations of

represents a roof, and suggests a story for

in which the kneeling person below

has been summoned to the palace to receive orders,³ while Chi sees a kneeling person with a mouth above him that gives him a command.⁴

to write 念. Even more interestingly, the one oracle bone inscription that the Sinica database has, uses neither one. Instead it shows what looks like an inverted form of 口/

as some sort of cover is incorrect.⁶

2. Qiú, 2000, p. 207. Qiú thinks that 今 is ‘probably the protoform of “吟” yín whose original meaning was “close the mouth and remain silent.”’ For support he quotes a sentence from the late 2nd century text Shǐjì 史記 (as one example of more that he knows of) but adds ‘This meaning of “吟” is different from the more usual one of “moan.”’

6. After posting this article I looked at 會 and 合. Scholars disagree about the top part in these being a “lid” or an “inverted mouth” as well. See my follow-up.